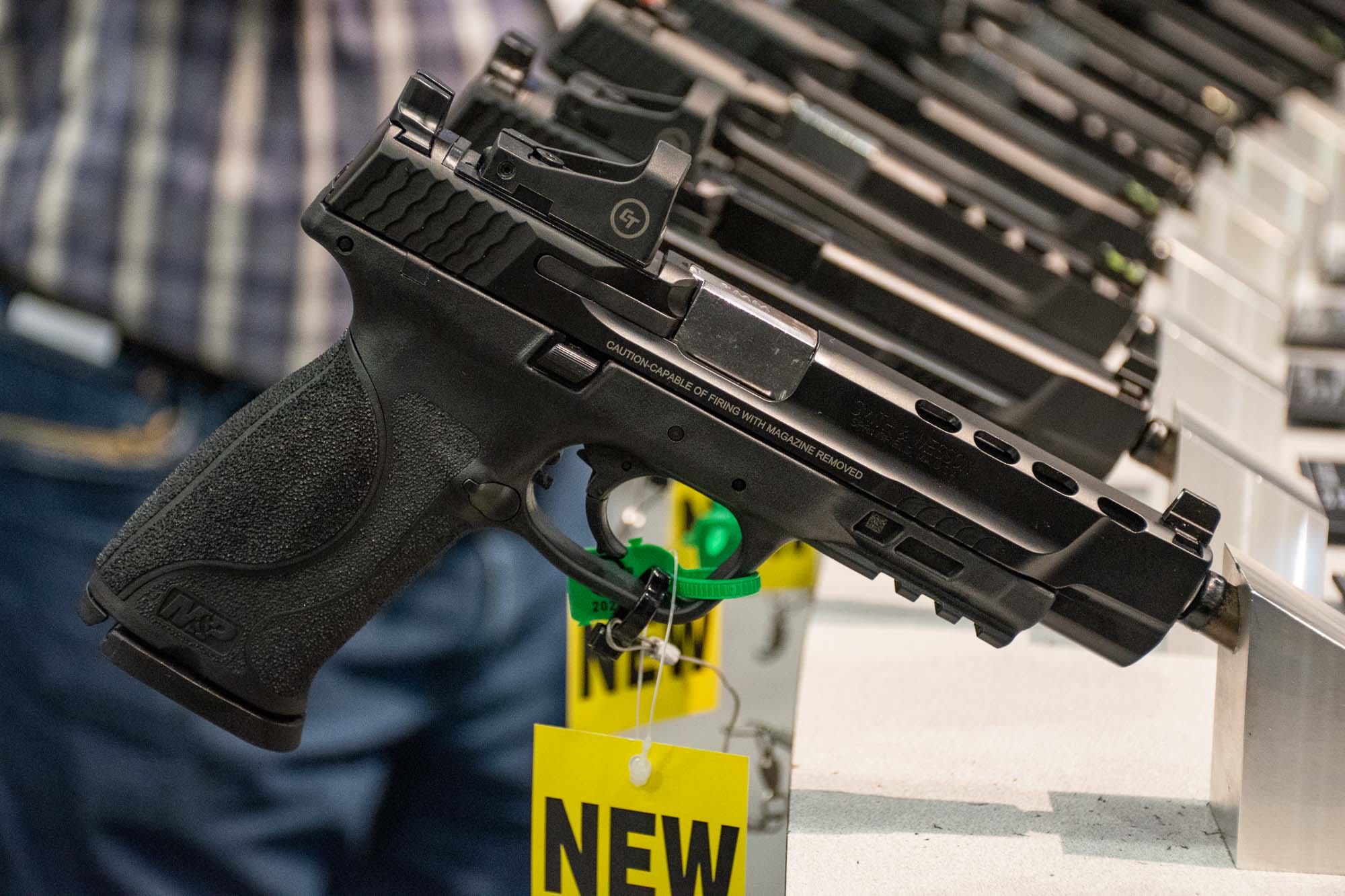 Precision built to be the most accurate and reliable firearms, M&P pistols are an experience you have to feel to believe.  Durable and comfortable, they are capable of handling as many rounds as you are.

Engineered with an attention to detail and superior ergonomics; built on high-strength polymer frame reinforced with a rigid stainless steel chassis. M&P pistols are the new standard in reliability when your job is to serve and protect and your life is on the line.

Bridging the gap between main production and the Performance Center, the Smith & Wesson Pro Series represents the next step up from standard production line models. 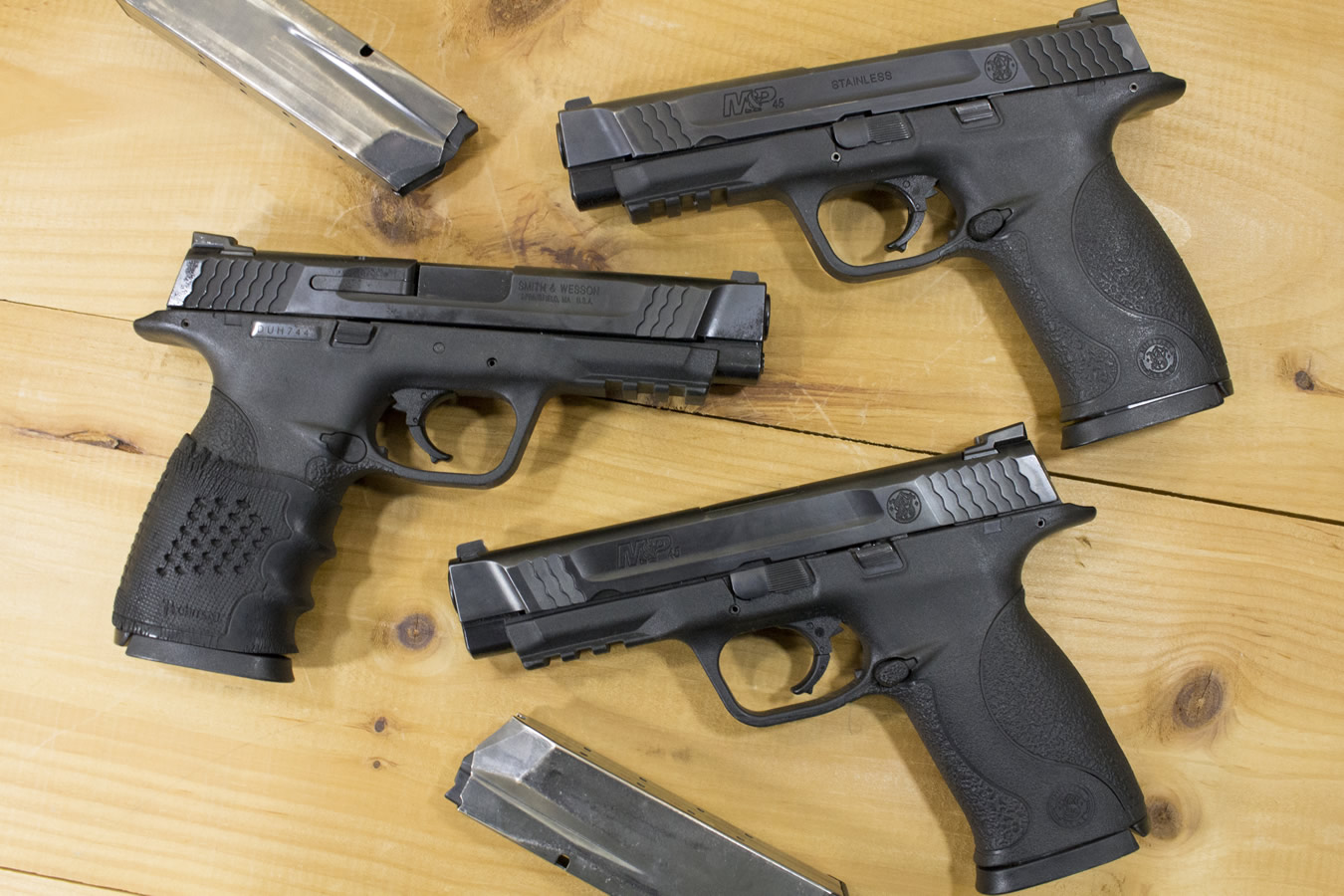 Precision built to be the most accurate and reliable firearms, M&P pistols are an experience you have to feel to believe.  Durable and comfortable, they are capable of handling as many rounds as you are.

Engineered with an attention to detail and superior ergonomics; built on high-strength polymer frame reinforced with a rigid stainless steel chassis. M&P pistols are the new standard in reliability when your job is to serve and protect and your life is on the line.

Bridging the gap between main production and the Performance Center, the Smith & Wesson Pro Series represents the next step up from standard production line models.

The Smith & Wesson M&P 9 mm M2.0 is a full-sized 17+1 striker-fired semi-automatic. This polymer pistol is a gentle but consequential evolution of the earlier M&P 9 mm albeit with an improved finish, frame, grip and trigger.

It’s a multi-purpose gun that’s good for professional, self-defense or sporting use. [Note: While the following covers the 9 mm versions, the same platform also comes in 40 S&W and 45 Auto versions.] 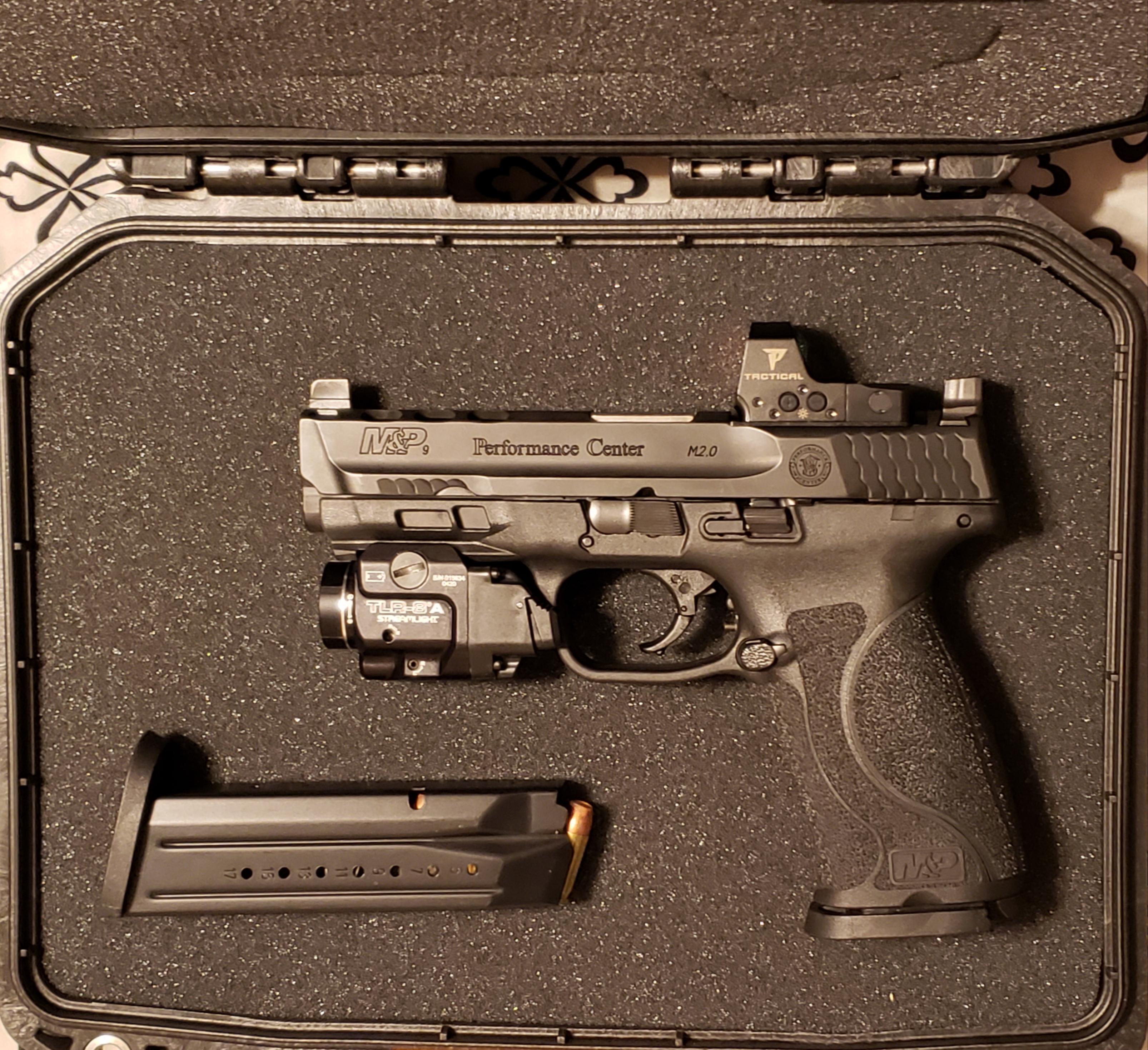 This latter version has a front green fiber-optic sight and a red rear fiber optic sight. The standout feature though is the four oval parts beveled into the slide just behind the front sight.

Smith & Wesson M&P 9 mm M2.0 has 10-round, 15-round, and 17-round magazine options and a 10-pound trigger pull Massachusetts’ compliant version. Some, but not all, come with a tactile loaded chamber indicator.

For those who know the original M&P 9 mm, this new 2.0 version will feel completely familiar. Everything is in the same place. The grip has an 18-degree angle.

The dimensions are almost the same. But let’s cover the differences. The most visible difference is in the slide. It is much more sculpted and chiseled with tumblehome flanks that are wider at the base than at the top.

The M&P 9 mm M2.0 is .2” shorter, largely because its beavertail is shorter. The grip reaches even higher up, and this means the bore axis is closer to the user’s hand. The result? More control, more comfort, less muzzle flip, and thus faster follow-on shots.

Both slide and barrel are made of stainless steel and then given S&W’s own Armornite nitride finish that combats the wear and enhances durability.

The slide’s seven tightly packed ocean wave rear serrations are deeply chiseled for optimal grip. It also has a few semi-spherical front serrations. Atop the slide is a white dot front sight and in back a two white dot sight. Both are dovetailed into the slide and both are made of steel.

The polymer frame has an ambidextrous slide stop and an ambidextrous magazine release. Inside the frame, the stainless steel chassis has stability-enhancing and flex-reducing extended guide rails.

Under the recoil spring housing a three-slot Picatinny accessory rail. Making everything happen is the new M&P M2.0 trigger. It has an audible and tactile trigger reset and has been designed to have a lighter trigger pull than its predecessor.

The grips are, well, grippier. The older grips had a curved style line down the center. The new one has a simpler, tighter bulge. Its texture is more prominent. The result is a gun that looks more aggressive, more modern, and it weighs 3.2 ounces less than its parent.

The gun comes in both matte black or flat dark earth (FDE). In either color, it ships with a pair of 17-round magazines. Many guns (including the original M&P 9 mm) have three interchangeable backstraps, but the M&P M2.0 ships with four, making it easy to optimize palm swell and trigger reach.

The M&P 9 M2.0 maintains cross-compatibility with the older version for sights, magazines, and more making it an easy upgrade choice.

This particular gun features 5-inch stainless steel and ported barrel and is chambered for 9mm. Because the barrel and slide extend past the end of the M&P9 frame, S&W engineers designed an extended rigid stainless-steel chassis, embedded into the frame’s polymer, to reduce flex and torque.

Spafford noted that this gun was the first of the Performance Center offerings to incorporate the new M&P M2.0 upgrades, which include the scale-style cocking serrations, enhanced grip texture, and improved sear geometry, giving the gun a crisper trigger.

Spafford noted the PC craftsmen spend a great deal of time judiciously polishing the sear’s engagement surface. First-generation guns possessed a trigger pull of around 6.5 pounds, and the 2.0 guns run about 5.5 pounds.

Performance Center’s smiths crafted a trigger pull that broke crisply at 4.5 pounds with a firm and audible reset. Quite frankly, the sample I fired in Idaho had one of the nicest triggers I’ve ever pulled on a striker-fired gun.

Building a gun that can fulfill the needs for competition and self-defense can be daunting, but the PC Ported M&P9 M2.0 seems to easily accomplish that mission. Its sights are easily picked up with the front sight, possessing a green fiber-optic rod, while the fully adjustable rear sight has two red fiber-optic rods on either side of the rear notch.

In addition to the slide vent ports, there are also a number of other slide lighting cuts made to reduce its weight for proper slide velocity. The recoil and muzzle flip of the Ported M&P9 is anything but snappy. In fact, it is a very soft-shooting gun!

The combination of the long sight radius, fiber-optic sights, crisp trigger, and firm reset made it possible to fire astonishingly fast and accurate double taps.

The Performance Center makes guns with competition in mind, designed to shoot fast and stay on target, according to Spafford.

The PC Ported M&P9 M2.0 also possesses a railed dust cover, so a weapon light and or laser can be mounted for low-light defense. It also has an ambidextrous slide lock located on the right side of the frame.

S&W ships the pistol with two 17-round magazines as well as a Performance Center cleaning kit. Backed by S&W’s lifetime service policy, the PC Ported M&P9 M2.0 should provide its user with a first-rate competition and defense gun.